Amazon best-selling Canadian solo artist Jef Kearns is transforming the flute from a background instrument to a serious soul voice in R&B and hip-hop. His goal, even from an early age, was to create a distinct and instantly identifiable flute sound with enough presence to command attention—just like an R&B singer’s voice.

Over his two decades as a professional musician, Jef has built what would be considered an impressive online following for any independent artist. His YouTube channel has exceeded 1.5 million views. For a solo flute player, it’s unprecedented. Kearns’ professionally produced discography includes two full albums, Soulfisticated, and On the Level, two EPs, and eight stand-alone singles.

Jef’s 2020 EP, Jazzy AF, was touted by popular music critique site Divide and Conquer as “a blend of sounds that creates a soundscape that listeners can easily get lost in. Not merely an instrumental album, Jazzy AF sees the artist mixing genres and creating a new sound. Kearns’ command of the instrument is unmistakable.” The release also hit #1 chart position on renowned Jazziz Magazine’s listener-voted new release chart “Inside Track.” His follow-up single Hazy hit #77 in the Top 100 RnB and Soul charts on iTunes Norway in 2021.

“One of the dopest flautists in the game right now.”
Jamal Ahmed (Host of the S.O.U.L. of Jazz, WCLK Atlanta.)

“He has a really lyrical way of playing that instrument, not quite like anyone else.”
James Tormé, LA jazz singer (son of Mel Tormé)

“His fresh, funky take on an instrument that isn’t always either of those things has made us a fan. He’s single-handedly turned the flute into a legitimate soulful instrument, and has deservedly gotten big-time attention in the process.”
Soul Tracks

“The Flute (EP) is a sonic revelation. A manifest creative breadth of an instrument, which is rare in this field of music.”
Smooth Style Magazine 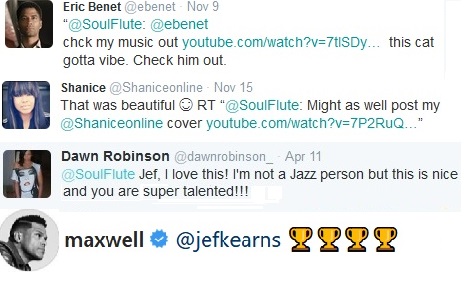